Why do you suppose Roosh starting advocating rape

Why do you suppose Roosh starting advocating rape

I think it's because he realized after awhile, all this "game" stuff is obsolete and too much work, when you can just cut to the chase and use your masculine power to take what you want. Girls have rape fantasies anyway, right? And they're attracted to the kind of men who make their own rules, and behave in a dominant way? And they're gonna make rape accusations anyway, and be believed by society when they do; so if you're gonna do the time, hey.

It makes sense that he would turn Christian, then, since Christianity doesn't really have anything to say against rape, as long as the woman wasn't betrothed or married. Roosh is against "fornication" now, but the Greek word translated in the Bible as "fornication" is porneia, meaning harlotry. All he's against, then, is banging sluts and prostitutes, which a lot of men are tired of doing anyway.

Of course, it will be argued, "How am I going to bang young chicks if I'm limited to my aging wife, and can't bang college sluts and whores?" That's where rape and/or seduction of virgins comes in! We can surmise that the Bible allows polygyny, because it says that a man is required to marry any virginal girl that he rapes or seduces. If a man who is already married were not allowed to marry additional wives, then the Bible would have had to provide for the situation where a married man raped or seduces a virgin; but the Bible is silent on that point, indicating it's handled the same way as if he were unmarried.

Another form of rape, of course, is when a woman is compelled by her father to marry a man, and then forced to put out to him. Roosh has said this is desirable.

Yet, who other than God, or God's church, has the clout to take on the feminists and say that this is the way it needs to be? The secular manosphere got its ass kicked when it tried to bring about such a drastic cultural change. Part of the problem is that the manosphere didn't have the necessary unity; there were still some guys who put their player lifestyle first. Now Roosh is jettisoning them; he's inviting them to self-deport.

Thus, what Roosh is doing is taking the forum in a more dogmatically radically patriarchist direction, and using religion as an organizing force, and as a way of repelling those who aren't serious about fighting against the feminists. Given that it's getting harder to game chicks these days, as more of them go in the direction of spinsterhood, or of choosing men based on their looks in Tinder profiles; plus the fact that he's gotten deplatformed for secular philosophies that perhaps would have been given more protection had they been religious, the direction in which he's gone makes a lot of sense.

Check out the contents of the first part of my book. 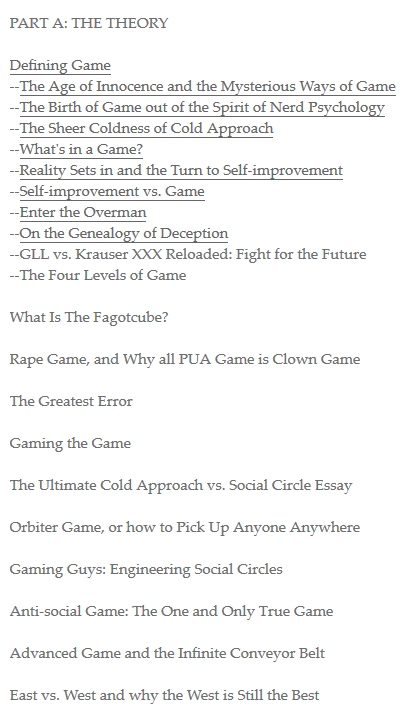 I have a whole chapter on rape.

Also, from my philosophy site: http://orgyofthewill.net/


377. Alex Kierkegaard's Daygame Turbo: Street Pick-up for Alpha Males. GET ANY WOMAN ANYWHERE EVER. 100% GUARANTEED TO WORK, THE ONLY PICK-UP SYSTEM THAT CAN BOAST THIS. No need to worry about your health, fitness, style, financial or social status, or about any other factor whatsoever SINCE THE GIRL HAS EXACTLY ZERO CONTROL OVER WHAT HAPPENS. The PUAs will tell you that pick-up won't always work, that it's a numbers game, etc. etc., but that's because their methods LEAVE ALL ULTIMATE CONTROL OVER WHAT HAPPENS TO THE GIRL. Alphas my ass. My method gives you FULL CONTROL, from start to finish of the interaction, so without further ado, here goes. Step 1. Buy a .45 Glock. Better yet, make it two. Step 2. Spot girl. Makes no difference if she's in a 2-set or a 3-set, or with her boyfriend, or a whole troupe of guys. If she's with boyfriend, shoot him in the face. If her girlfriends get in the way, shoot them in the face too. Step 3. Grab her by the hair. If she resists, slap her around a bit (taking care not to damage her. If you do, find another girl and start over.) Step 4. Shove her in your car. Any bystanders try to stop you, shoot them in the face. Police chase, you get the idea. Step 5. Take her home. Step 6. Smash her smartphone and chain her to your bed. Step 7. Have fun for the rest of your or her life (probably hers since she won't live very long under these conditions. If, on the other hand, you want a real relationship and children, I have two words for you: Stockholm Syndrome.) The PUAs and PUA theory have only been around a decade, MY theory has been around forever. THIS IS THE TRUE FACE OF ALPHA. ANY OTHER APPROACH WHATSOEVER IS GAMMA TO THE CORE (betas don't approach girls, they wait until the girls approach them). THE END.

That aphorism was written back in 2013.

This is one of the things for which I respect Roosh. He has no delusions of "alphaness" like the nerdy Krauser. He knows he's a clown and says so, while Krauser spends all day every day trying to convince himself his nerdy self is some kind of apex predator lol. He calls his PUA lessons "residentials" lol. He equates taking some poor schmuck in the street and pushing him to say hi to girls with medical students learning how to perform surgery.

I have a much simpler explanation: He wanted to drive traffic to his site, and decided "all publicity is good publicity". He miscalculated and is now banned in several countries. Roosh is a self-serving, selfish person, first and foremost. This was nothing but a money grab, an attempt to drive traffic (and therefore ad revenue). The pathetic b.s. excuse he fabricated after ("it was a thought experiment!") fooled no one. Guy is crass. Any value he added to the manosphere ended long, long ago - he's been a liability for some time.
"Banh mi" is a great sandwich. "Ban everyone who disagrees with me" is the mark of a power-hungry moderator.

Jim at his best.


Family
The immense biological and reproductive differences between men and women means that they can only cooperate for family formation on asymmetric, unequal terms. The wife has a duty to honor and obey, the husband to love and cherish. To ensure cooperation between men and women, the state, the family, society, and religion have to force men and women who sleep together to stick together, to force them to perform their marital duties, to force the man to cherish and the woman to obey, otherwise you get defect/defect, and reproduction and family become difficult for both men and woman.

For hypergamy to be eugenic rather than dysgenic, taxpayers and warriors need to have a special right to use violence and to not be insulted. For marriage to work, pimps, sluts, and whores need to have a substantially less protection against violence, insult, and rape. For marriage to be incentive compatible for women it has to be simply legal for a respectable man to chain a slut up in his basement, and if she does not want to risk that outcome, she needs to sign up in a nunnery or submit to husband. A right to protection should require chastity and/or submission to the authority of a husband or father. Sluts shall have legal authority equal to chaste women? What! This inevitably results in sluts being given legal status higher than that of chaste woman, and that is exactly what is happening. Wives, like whites, are very much second class low status citizens. We have an aristocracy, and black whores are at the top.

You will notice that the doctrine that all women shall be equal required and led to the doctrine that all women are naturally chaste, enshrined in our current law on rape and sexual harassment, which presupposes that the primary person who is harmed by rape and sexual harassment is the woman, and the primary person who is going to object to it and be distressed by it is the woman, rather than the father, her biological kinfolk, and the husband. The transparent falsity and absurdity of this doctrine leads to the transparent falsity and absurdity of all rape and sexual harassment charges and convictions, as near to all of them as makes no difference. Legal equality necessitates and results in a denial of biological inequality.

Rape and sexual harassment laws that give women equal status to males are a problem, because in practice their resistance to rape and sexual harassment is a fitness test – they are pissed at you if you fail the test, not pissed by being successfully raped. So rape and sexual harassment charges based on the legal theory that these are crimes against the women herself, rather than her husband or family, always originate from failed shit tests – and the overwhelming majority of these failures do not involve rape and sexual harassment. What happens in the vast majority of cases, for all practical purposes all of them, is that a woman is sexually attracted to a man, hits him with a brutal and hard to pass shit test out of the blue, he fails, she feels creeped out, and comes to believe that something must have happened that legally justifies her feeling of being creeped out. In the rare and unusual occasions when they are based on an actual attempt at rape or sexual harassment, they are based not on the rape or the sexual harassment, but on the man failing her fitness test by retreating from her hostile response. They originate from male behavior that is not all that bad – just weak, the male trying something, but then retreating in the face of determined opposition.

We cannot give women the same legal right to protection against violence and insult as men, because they fail to cooperate in that protection. The best we can do is grant state backing for nunneries, husbands, and fathers protecting their wives and daughters, because husbands and fathers are going to cooperate in that protection, and the male priests supervising the nunnery will cooperate in that protection. Violence and insult against women has to be handled as an offense against the male authority that cares for them, because if handled as an offense against the women themselves, the women are unhelpful, untruthful, deluded, and uncooperative, failing to report the kind of offenses that we want to suppress, and delusively reporting non offenses.

Users browsing this forum: No registered users and 4 guests